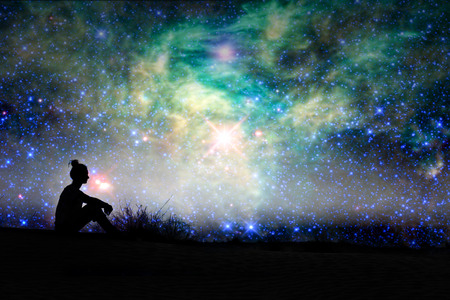 I’ve spent much of my life alone, and it never bothered me to be by myself.

My comfort with my own company came early in life, and was magnified by a traumatic tonsillectomy in March 1958 when I was seven years old. Ether-induced hallucinations showed me a dark world much different from the one I had known before.

I don’t know where the nightmares came from, because there was nothing in my world that would have prepared me for the danger and malice that I saw and experienced in the dim regions of my subconsciousness: the evil in an adult world that not only couldn’t protect the vulnerable but preyed upon them.

Where does a seven-year-old child raised with love find such things? I could recover from the tonsillectomy, but I couldn’t recover from the malignant visions that had haunted me. I was a different child afterwards, introverted and shy, safe within myself but otherwise exposed.

I didn’t stop liking people and seeking a connection with others, but I was entirely satisfied living within myself. I remember reciting Rudyard Kipling’s famous poem “If” in sixth grade and letting the words and their meaning burn into my heart. It remains my favorite poem to this day, a tribute to self-reliance and self-containment, and, finally, to self-restraint. Admirable but not always easy to achieve.

Perhaps in the long run, we really do get the life we ask for. When my eldest brother and I were in college, our dreams were different. Driving back home one Saturday, we passed a furniture store.

“Wouldn’t it be nice to have a home and a family?” my brother mused aloud. No, I didn’t think it was nice at all.

The adventure I was looking for featured me as the lone wanderer, the gypsy scholar of romantic fame seeking a full and rich life for herself. As the eldest child of five and the only girl I had had enough of a taste of motherhood, and it did not appeal. As for a husband, maybe yes, maybe no. Not important.

Once when I was eighteen and a freshman in college, I became seriously involved with a boy from another school. At one point, I actually considered that I might not only get married after all, but marry young as well. That dream faded in the ashes of misunderstandings, and no other dream of love or marriage on this side of the universe had taken its place.

My brother went on to have his home and family, and I went on to seek my adventure on my own.

I spent about two decades here and there, away from home. Always alone. I never had any qualm about eating alone, drinking alone, attending events alone. I didn’t spurn company, but I kept my independence.

I was alone but never lonely. Approaching forty, I came home to live with my widowed aunt. Her sister-in-law lived with her following the death of her husband and now she was dead too, and the house was too big and empty for one. When my aunt died, I realized just how big and empty a house could be. It was not like the apartment living that had once made my single life so simple.

With one turn of Fortune’s wheel, things changed for me. I met a man through mutual friends and we carried on an email conversation.

Suddenly, at the other end of life, I had found a man who loved me and whom I could love.

We had fun and we had a good life. We were each other’s top priority, and that is how we thought it should be. There were only two of us, but we constituted a family. In many ways, we were complete opposites, but, placed together, we formed one good working unit. He could do all of the things around the house that had made living there almost impossible for me, and I could do the bills, the taxes, and the bureaucratic and administrative stuff that confused him and made him unhappy.

When he and I went into this marriage, I talked blithely about having thirty years together. Even as I said it, I knew that our living to our mid-80s was rather optimistic. As it was, we weren’t even given half that time. I only knew him for fourteen and a half years. We were only married for twelve and a half.

Then he was gone. Even though we were already making plans for the future. For those trips out west and to England that we would never make. My husband is gone, and I am alone again.

Something that consumed one-fifth of my life must surely be something significant and lasting.

I consider that many of my contemporaries have lived with their partner for decades, maybe even half a century. I wonder how they face loss after so many years together.

Then I think of the many people who lose their partner young, who often must raise children on their own and have much more at stake than a broken heart and a devastated spirit, although they are left with those too.

At the end of life, we alone make that journey and leave our bereaved loved ones behind.

There is a larger picture, isn’t there? A Presence that some of us can feel most intimately when we are alone. Perhaps even our perception that we are alone is an illusion.

What we believe about the world and the universe, the purpose of life, and life beyond this one is another journey we have to make alone. But, hopefully, there will be loved ones along the way, and a bright Light always there to guide our walk and meet us at the end.